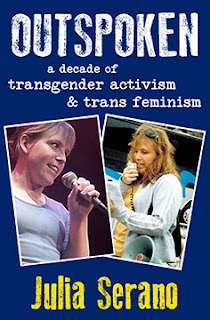 [This essay has recently been revamped (with additional material!) as a chapter in my third book Outspoken: A Decade of Transgender Activism and Trans Feminism]

This morning, I woke up and found my Twitter feed full of article links celebrating that transgender people are no longer “disordered” according to the DSM (that is, the Diagnostic and Statistical Manual of Mental Disorders - often referred to as the "psychiatric Bible" because it contains all of the official psychiatric diagnoses). The DSM gets revised every 10-20 years or so, and diagnoses sometimes get modified, expanded, or completely removed. The change that people are now celebrating is the fact that the previous diagnosis of Gender Identity Disorder (GID) has now been changed to Gender Dysphoria.

Admittedly, the new Gender Dysphoria diagnosis is an improvement over GID for a number of reasons - Kelly Winter of GIDreform.org describes some of these improvements, as well as many of the lingering problems with the new diagnosis. Despite the remaining drawbacks (for instance, that gender variance is still formally pathologized in the DSM), many people seem excited that transgender people are no longer described as being "disordered" in the DSM. But the problem is that this is patently untrue.

When the new DSM committee was chosen back in 2008, all the focus was on what the new committee (chaired by the notorious Ken Zucker) would do with GID. This is understandable, given that this is the diagnosis that trans people are required to submit to if they with to access the means to legally and/or physically transition. It has also been used to justify horrible reparative therapies against gender-non-conforming children. But the greater trans community gave short shrift to the other existing DSM diagnosis that affected transgender people: Transvestic Fetishism.

I sometimes joke that Ray Blanchard is my arch nemesis (after all, every trans narrative needs a good arch nemesis!). Much of his career has been spent psychiatrically sexualizing trans female/feminine-spectrum people, most notably via his theory of "autogynephilia." I won't go into all the details here, as I have written about Ray Blanchard's theories extensively elsewhere.

Being familiar with his work, I was worried that Blanchard might try to expand the Transvestic Fetishism diagnosis. He did not disappoint. As I outlined in my 2009 article "Why feminists should be concerned with the impending revision of the DSM," Blanchard sought to both expand the DSM definition of "Paraphilia," as well as expand the previous Transvestic Fetishism diagnosis, which he renamed "Transvestic Disorder." As I pointed out in my keynote for the Philly Trans Health Conference that year:

Ray Blanchard has been named to chair the Paraphilia subworkgroup for the DSM-V, and he has proposed changing the Transvestic Fetishism diagnosis to Transvestic Disorder with one of two modifiers: with Fetishism, or with Autogynephilia. While the diagnosis supposedly targets “heterosexual males” who crossdress, the psychological literature regarding autogynephilia (the bulk of it written by Blanchard) repeatedly claims that lesbian, bisexual and asexual trans women are really just heterosexual men with a fantasy problem. Therefore, according to Blanchard’s proposal, a queer-identified trans woman (such as myself) could theoretically be diagnosed as having "Transvestic Disorder" any time that I have any kind of sexual urge while wearing women's clothing. Since I wear women's clothing pretty much every day of my life these days, my sexuality would presumably be considered perpetually transvestically disordered according to this diagnosis.

I tried at great length to raise awareness of the Transvestic Disorder diagnosis when it was first proposed. So did a few other trans activists and advocates, most notably Kelly Winters. But for the most part, the trans community ignored the proposed diagnosis, probably because (in its original form) it was not applicable to trans male/masculine folks nor heterosexual-identified trans women. Personally, I stopped writing about it because I felt like the community was simply not concerned.

And then, when no one was looking, in mid-2010, Blanchard and the DSM committee expanded it even further, so that it now includes trans people of all identities, trajectories and sexual orientations. As it is written now, Transvestic Disorder can be applied to any person who is sexually active while wearing clothing incongruent with their birth-assigned sex. It also canonizes the term "autoandrophilia" as a sexualizing diagnosis that can be applied to trans male/masculine folks. And while GID/Gender Dysphoria are pathologizing, Transvestic Disorder is both pathologizing and sexualizing. And when you sexualize someone, you invalidate them!

So please don't say that transgender people are no longer considered "disordered" according to the latest DSM. It is simply not true.

[note: If you appreciate my work and want to see more of it, please check out my Patreon page]

post-note: the day after publishing this, I wrote a follow-up piece. And here is a speech I wrote for the trans protest of the 2009 American Psychiatric Association (who write the DSM) called "Stop Sexualizing Us"