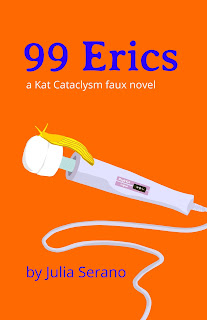 So a couple new 99 Erics book reviews were recently published and I wanted to share excerpts with you!

This excerpt is from Kirkus Reviews:

Serano has written about gender identity and feminism in her nonfiction books Whipping Girl (2007) and Excluded (2013); she explores many of the same ideas in her debut work of fiction. The writing is conversational in style, and though Kat claims to be uninterested in banal descriptions, the scene-setting in various California locales works well. Kat recalls the Manic Pixie Dream Girls so often used in male-oriented stories, but she’s decidedly more warts and all in her presentation, almost too quirky to function, and enthusiastic about her role as ruler of all the Erics. The result is a lovable composite of Tom Stoppard’s Rosencrantz and Guildenstern Are Dead (1966) and a less murder-y version of Marvel’s Deadpool, using absurdism and humor to break down the fourth wall and the very idea of “normal,” with all its silly little boxes and prejudices. If that makes the book sound serious, it isn’t—and that might be the most effective way it makes its readers think about identity. Knocks down literary conventions, sexual stereotypes, the fourth wall, and more in enthusiastic defense of the weird.

the full review (with a few spoilers) can be found here: https://www.kirkusreviews.com/book-reviews/julia-serano/99-erics/

The second review is from BookLife:

Serano (Whipping Girl) drenches readers in satire and absurdity in this “faux novel” written from the perspective of Kat Cataclysm, a wannabe author who decides to jumpstart her career by introducing more conflict into her life -- in the form of dating 99 men named Eric and novelizing the experience. With light chapters that recount Kat’s dates and failed relationships, the tone akin to conversational journal entries or letters to friends, Serano delves into issues of city life and contemporary romance, such as how money destroyed San Francisco or an analysis of Kat’s annoyance when straight men assume bi women will want a threesome ... The appeal, here, is in Kat’s noxious encounters with Erics and how she heroically mines them for witty considerations of the absurdities women face when dating -- and even occasional catharsis ... Takeaway: This meta-fictional satire in which a woman dates 99 Erics will please readers who favor pointed absurdity over emotion. Great for fans of: Daniel M. Lavery’s Something That May Shock And Discredit You, Spike Milligan’s Puckoon.

the full review (with a few spoilers) can be found here: https://booklife.com/project/99-erics-a-kat-cataclysm-faux-novel-52545

As always, you can learn more about 99 Erics (including free downloads, excerpts, virtual book readings, and how to purchase signed copies) at my website.

One final semi-related thing: Esquire recently published a piece called These 15 Feminist Books Will Inspire, Enrage, and Educate You, which includes my first book Whipping Girl!