Excluded selected as one of the best books of the decade!

I have had a bunch of book-related news of late, some of which I've alluded to or mentioned elsewhere on social media over the last several months. But I figured that it would be helpful to pen a few posts to share all this news in a more comprehensive manner. So here is the first of four posts – the biggest news of all will land next Tuesday... 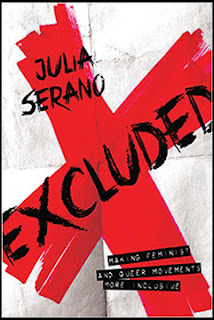 As you know, the 2010s recently came to an end. And I was excited to see that my 2013 book Excluded: Making Feminist and Queer Movements More Inclusive made two different "best of the decade" lists!

The queer women's website Autostraddle included the book in their article: 80 of the Best Queer, Lesbian and Bisexual Books of the Decade (you'll find it in the non-fiction section of the list). Here is what they said about it:

As a trans woman, bisexual, and femme activist, Julia Serano has spent much of the last ten years challenging various forms of exclusion within feminist and queer/LGBTQ movements. In Excluded, she chronicles many of these instances of exclusion and argues that marginalizing others often stems from a handful of assumptions that are routinely made about gender and sexuality. These false assumptions infect theories, activism, organizations, and communities–and worse, they enable people to vigorously protest certain forms of sexism while simultaneously ignoring and even perpetuating others.

Writer and cultural critic Noah Berlatsky also included the book in his Ten Best Non-Fiction Books of the Decade list. There, he links to a The Atlantic interview he did with me when the book first came out.

If you haven't read it, you can find a slew of other interviews, reviews, and excerpts from the book on my Excluded webpage. Part One of the book is a collection of personal essays about the exclusion of transgender, bisexual, and feminine people from queer and/or feminist movements (similar in style and themes to my first book Whipping Girl). Part Two of the book contains some of the best essays I have ever written (IMHO), including novel strategies for mitigating "call-out culture," overcoming exclusion, and challenging prejudice in all of its various forms.

So please consider picking up a copy or checking it out of your library!