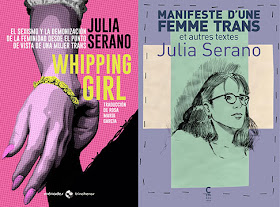 Welcome to the second of four posts summarizing recent news about books that I have written and/or contributed to. In this post, I am honored to announce the publication of Spanish/Español and French/Français translations of my first book, Whipping Girl: A Transsexual Woman on Sexism and the Scapegoating of Femininity!

The Spanish/Español translation is entitled Whipping Girl: El sexismo y la demonización de la feminidad desde el punto de vista de una mujer trans. Rosa María García is the translator, and it is published by Ménades Editorial. The book can be purchased directly from the Ménades Editorial website (via that link), and a Kindle version can apparently be found on Amazon (aka, the U.S. site).

The French/Français translation is entitled Manifeste d'une femme trans: Et autres textes. Noémie Grunenwald is the translator, and it is published by Éditions Cambourakis. Unlike the Spanish version (which is a translation of the full book), Manifeste d'une femme trans includes translations of 8 chapters from the book (Trans Woman Manifesto, Skirt Chasers, Pathological Science, Dismantling Cissexual Privilege, Ungendering in Art and Academia, Experiential Gender, Deconstructive Surgery, and Love Rant). The book can be purchased directly from the Éditions Cambourakis website (via the above link), or from the French Amazon site.

As of now, these are the only two translations of any of my books. However, a number of my individual essays have been translated into other languages – those can be found on the translations section of my writings webpage. If you are interested in potentially translating one of my books or essays yourself, an “FAQ” (frequently asked questions) on how to do so can be found here.