He's Unmarked, She's Marked: my essay in Believe Me 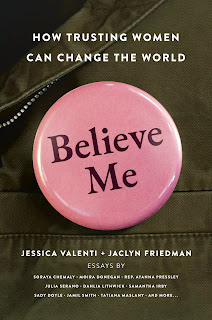 Welcome to the third of four posts summarizing recent news about books that I have written and/or am otherwise included in. In this post, I want to talk about my contribution to the new Jessica Valenti & Jaclyn Friedman anthology Believe Me: How Trusting Women Can Change the World, which just came out a month or so ago.

During the height of the #MeToo movement in 2017-18, many people shared their personal stories of sexual harassment & assault using the hashtag #BelieveWomen, intended to highlight the fact that our accounts are often presumed to be dubious or outright untrue. This collection offers many insights into this problem while simultaneously expanding the discussion to include other marginalized groups and survivors of sexual assault. Lots of amazing writers and activists share their perspectives and strategies in this book, and I am very honored to be included amongst them!

When I was asked to contribute to this anthology, the first thing that ran through my mind was this: On past occasions when I have personally experienced sexual harassment or attempted date rapes, I wasn't worried so much that people wouldn't believe me because I am a woman. Rather, I thought that they would primarily dismiss my account due to the fact that I am transgender. And of course, this isn't a trans-specific issue. I've heard similar sentiments from sex workers, people of color, disabled people, and other LGBTQIA+ people. In fact, the accounts of all marginalized groups (including women) tend to be discounted or disbelieved to varying degrees, and it is even more so for individuals who are multiply marginalized.

Within feminist and social justice circles, we often frame such experiences in terms of intersectionality, which recognizes that some people face multiple forms of marginalization simultaneously, which can exacerbate the obstacles they face (in this case, having their experiences with sexual harassment and assault discarded or discredited). While concepts like sexism and intersectionality are powerful, I have found that people outside of activist circles often find them to be rather abstract, and have difficulty applying them to real life circumstances (such as whose accounts of sexual misconduct are taken seriously).

Back when I was writing my second book Excluded (which btw was recently mentioned in two "best books of the 2010s" lists), I was looking for more accessible and tangible ways to explain how prejudice and double standards work. I eventually settled on the unmarked/marked dichotomy – that link will take you to a blog post where I delve into this further. In brief: Some people, traits, and accounts are viewed as the norm and are taken for granted – they are "unmarked" in the eyes of the general public. In contrast, other people, traits, and accounts are "marked" – they seem "remarkable" to us, and they often garner undue attention and scrutiny as a result. As I explain in both Excluded (chapter 14) and in my recent Believe Me essay (entitled "He's Unmarked, She's Marked"), people who are marked for some reason (e.g., because they are members of marginalized groups) tend to be viewed as questionable and suspect a priori, and are often presumed to have some kind of "ulterior motive."

It is my hope that "He's Unmarked, She's Marked" will help shed some light onto the unconscious biases that help lead us to view certain people's accounts as unquestionable and others as questionable. I also hope that it provides an accessible explanation for why people who are multiply marginalized – e.g., those who are doubly or triply (or more) marked – are discounted or disbelieved to an even greater degree.

I encourage you to pick up the book, not only for my essay, but for all the other amazing essays as well!

And if you are more generally interested in my thoughts about sexualization, and how it is often used as a tool to undermine women and minorities, I encourage you to check out some of my other writings:


[note: If you appreciate my writings and the work I do, please check out my Patreon page]
-julia at 11:51:00 AM
Share