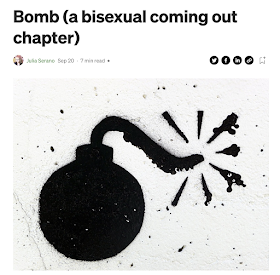 As some of you may know, I sometimes publish articles on Medium – that link will take you to my Medium page, where you can find all the pieces I've written there. Here, I will share my six most recent Medium articles, spanning back to December of last year. All of the links below are "friend links" that bypass the site's paywall – so feel free to read them all for free!

For Bisexual Visibility Week, I published Bomb (image to right), which is a chapter from my award-winning book 99 Erics: a Kat Cataclysm faux novel. It humorously defuses many of the assumptions people face upon coming out as bisexual. It also critiques what Kat calls the "stereotype trap," as well as authors who turn their LGBTQIA+ characters' identities into "plot twists." If you enjoy it, many more excerpts from the novel can be found on the official 99 Erics webpage.

Transgender People, Bathrooms, and Sexual Predators: What the Data Say was months in the making. The piece not only compiles numerous research studies showing that transgender people are victims (not perpetrators) in such settings, but it also places these "bathroom panics" in historical context, showing how they evolved directly from Anita-Bryant-1970s-era claims that LGB people are "child molesters" out to "recruit children." The final section debunks more recent outlandish claims that trans people are "grooming" and "sexualizing" children. I wanted to touch on all these themes, not only because they unfairly disparage trans people, but because they are all more generally used to smear marginalized groups who are perceived as "other" in some way, and thus misconstrued as a potential "threat to women and children."

I don't usually write about TV shows and pop culture, but I did just that in Here’s why some people find the Loki-Sylvie romance unsettling. Hint: the answer (or at least one of the answers) is unconscious transphobia...

I compile many of my writings related to transmisogyny in the piece What Is Transmisogyny? It includes a downloadable link to a brand new academic review article that I wrote on the topic.

The Dregerian Narrative (or why "trans activists" vs. "scientists" framings are lazy, inaccurate, and incendiary) is a new essay describing a very old anti-trans trope.

And finally, Transgender People, “Gay Conversion,” and “Lesbian Extinction”: What the Data Show was my response to the increasingly common anti-trans memes that lesbians are supposedly going "extinct" due to people transitioning, and/or that transitioning constitutes a form of “gay conversion therapy.” As the title suggests, I show that current research data do not support these claims.

That's it for now. If you appreciate the fact that I make these articles available for free, please consider supporting me on Patreon.