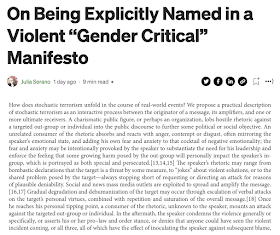 A few months back, I published an essay entitled Transgender People, Bathrooms, and Sexual Predators: What the Data Say. It cited numerous research studies showing that trans people and trans-inclusion policies pose no threat to cis people in sex-segregated spaces. It also chronicled how similar campaigns to smear an entire marginalized group as supposed "sexual predators" have occurred previously, for instance, against Black people, Jewish people, and gays and lesbians. In other words, this is a standard trope that bigots and haters love to wield.

In the wake of recent events, I have two new "sequels" to that essay. The first is my formal response to being named in that anti-trans manifesto that was going around last week. (For the record, I am doing okay, all things considered.) In my response, I discuss how anti-trans activists' increasing attempts to smear trans people (and particularly trans women) en masse as "sexual predators" is directly responsible for expressions of violence such as this. You can read it here: On Being Explicitly Named in a Violent “Gender Critical” Manifesto.

The second new essay chronicles anti-trans activists' increasing promotion of "autogynephilia," a debunked psychology theory that they use to ... wait for it ... smear trans women en masse as "sexual predators." I also describe their recent attempts to wield "autogynephilia" in tandem with the fake diagnosis "ROGD" in order to undermine trans healthcare more generally. You can read that one here: Autogynephilia and Anti-Transgender Activism.

By the way, both are on Medium (these are no-paywall links), so please read & share widely & give them lots of "claps" (up to 50, I believe).

[note: If you appreciate my work and want to see more of it, please check out my Patreon page]
-julia at 12:15:00 PM
Share
‹
›
Home
View web version